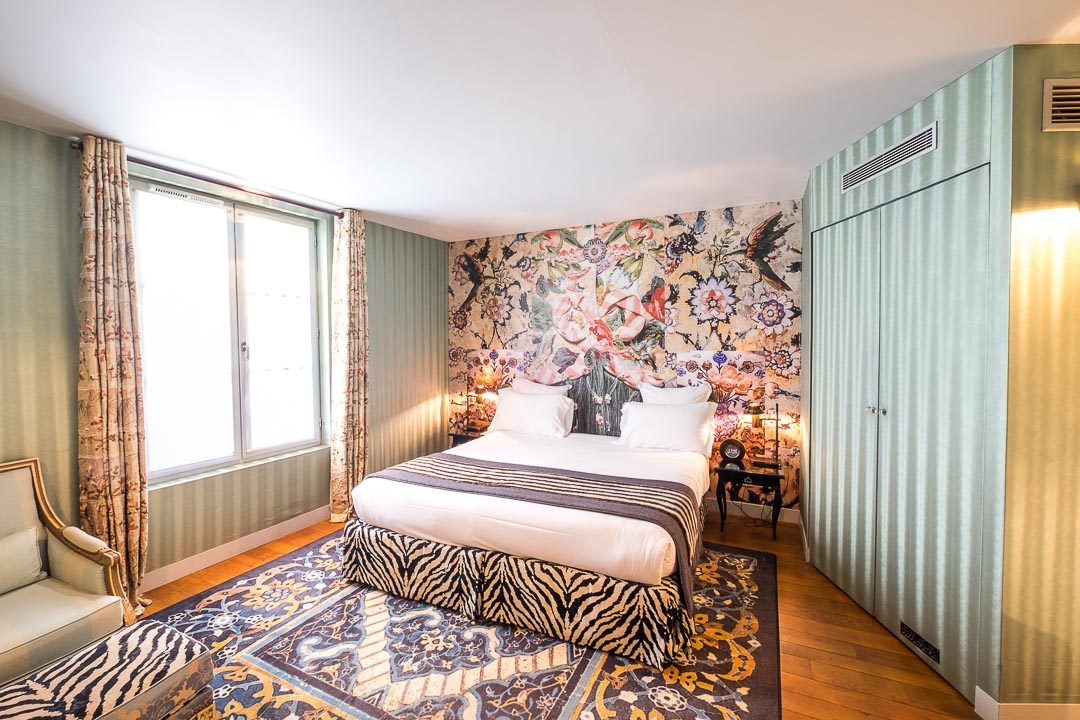 A city trip to Paris requires an overnight stay in style. At Hotel du Petit Moulin, that style is uniquely eclectic, and it fits the atmosphere of Paris perfectly. There’s a hint of nostalgia combined with a healthy dose of the sort of sheer class that’s just on the edge of kitsch. As well as its unusual interior this hotel is ideally situated and has every modern comfort. So it’s a great base to go and discover the city.

A short and comfortable journey of two hours or so by high-speed Thalys train and Metro brings you to the heart of Paris Marais. The history of this charming suburb goes back to the 13th century when monks first began to cultivate the marshy ground. The area then became a base for the king, and the monks also gave shelter to many Jewish immigrants. Today it’s one of the quartiers, with nice shops, cosy cafes and cool eateries. It’s an area that’s popular with Parisians both to live and go out for fun. It’s a little piece of authentic Paris. Hotel du Petit Moulin is walking distance away from both the Pompidou centre and Notre Dame. It was to be our headquarters as we discovered Paris over the coming days.

The oldest bakery in Paris

Hotel du Petit Moulin is hidden away behind the historic walls of a former bakery. According to the records this is the oldest boulangerie in Paris. Apparently Victor Hugo came here to get his baguettes! 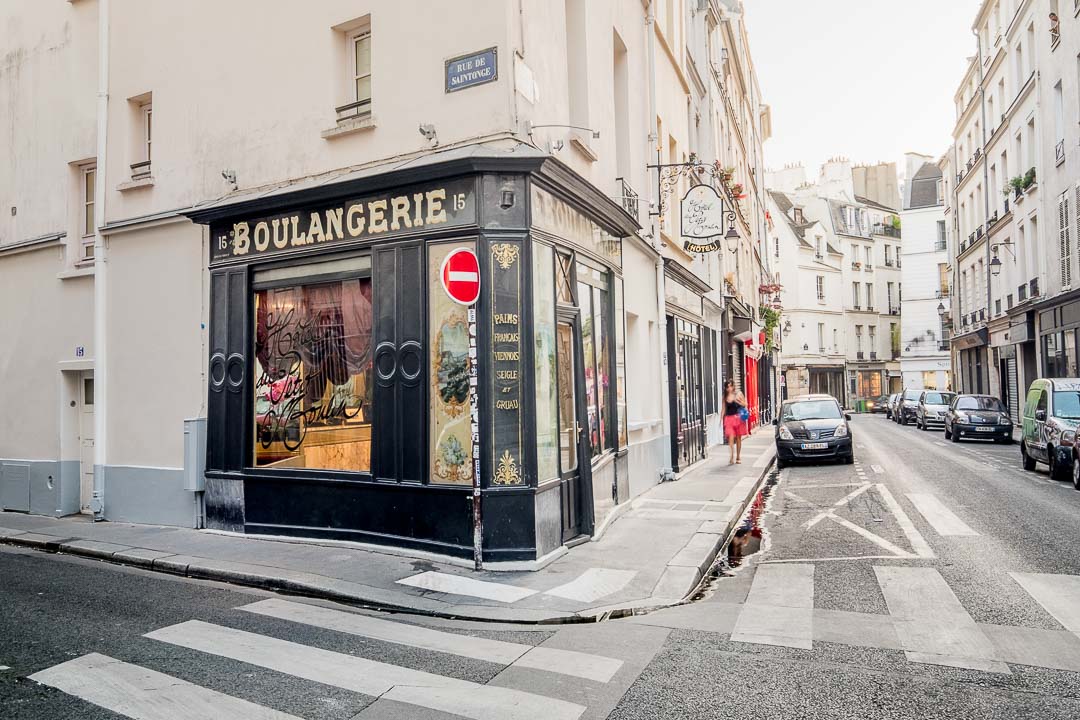 But make no mistake – the inside looks very different from what the outside appearance suggests. Hotel du Petit Moulin is actually a modern 4-star luxury hotel with a completely unique design. The interior is the work of Christian Lacroix and is somewhere between classy and kitschy. The man himself describes it as “a doll’s house”; the style of every room is different, and reminds you of something out of an encyclopaedia of 20th century design. Whatever; we loved it! Add in the great location and modern comfort and you’ve got every reason to put Hotel du Petit Moulin on your wish-list of great places to spend a night in Paris. 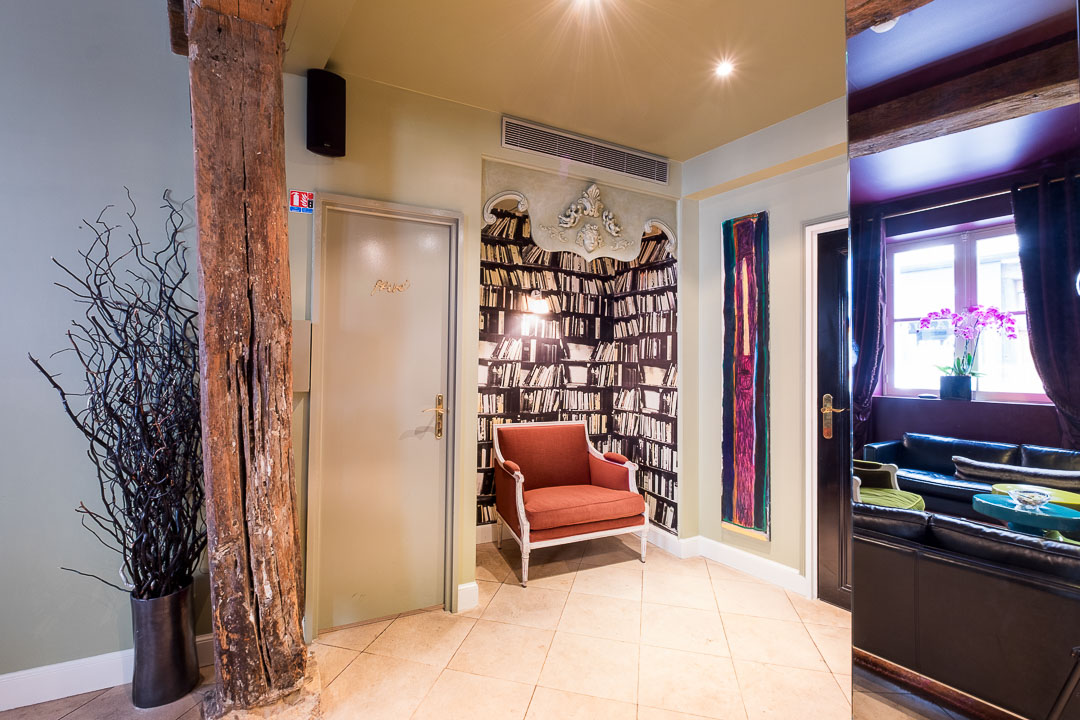 There’s a friendly welcome in the hotel’s lobby, and a bar downstairs that stays open all day, so you can have a drink whenever you fancy one. All you have to do is write down what you have and settle up later. Fun, easy, and very civilized! 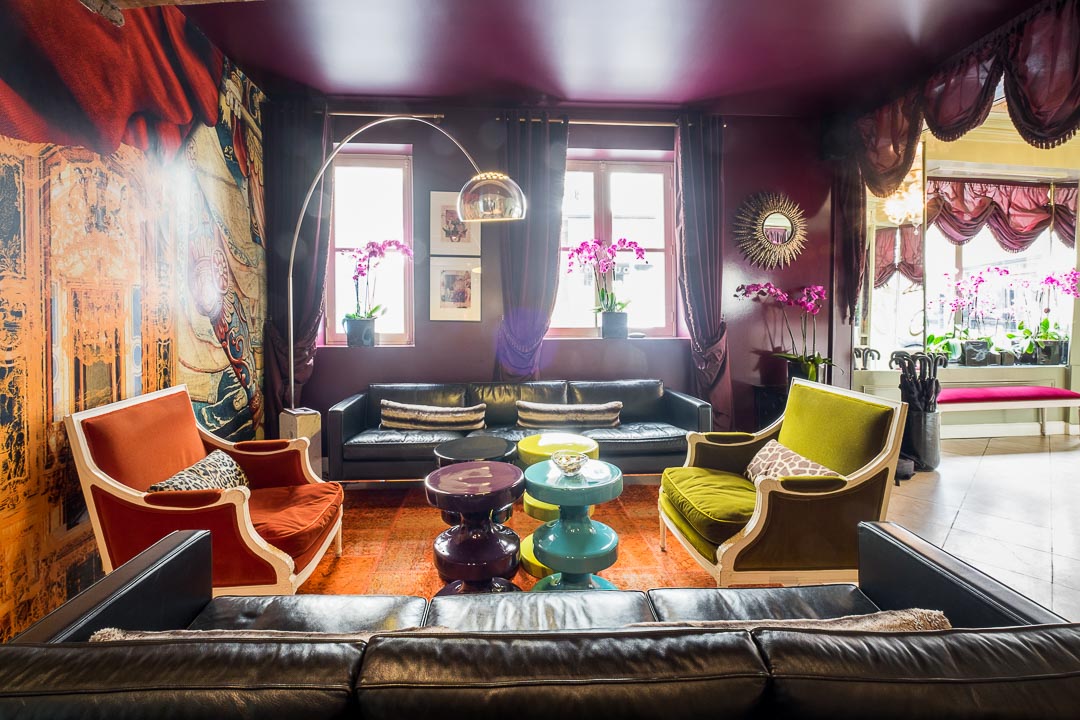 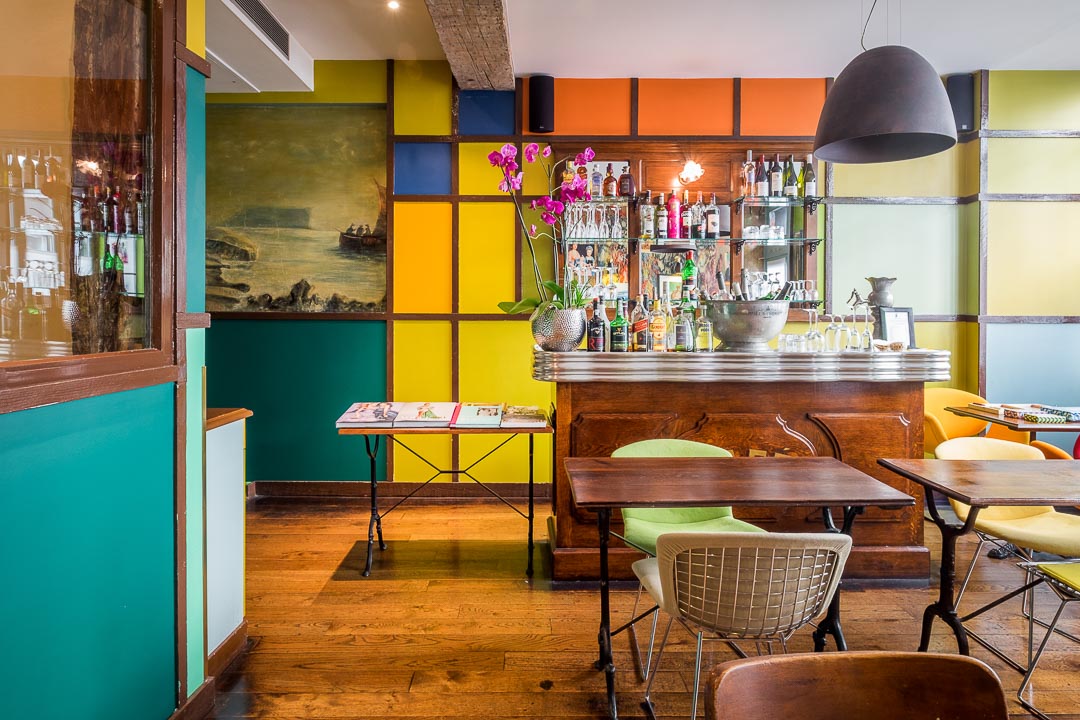 Rooms with a unique design

Each of the 16 rooms in Hotel du Petit Moulin – and the Junior Suite – tells its own unique story, with its own design to go with it. While one room might be full of light and quite edgy, another will have an antique rustic look. But with their sense of drama, playfulness and classy modernity they’ve all got a bit of mystique and all shown the influence of Lacroix as their designer.

We stayed in a sexy Deluxe room, where there was certainly no shortage of either space or comfort. Even with its heavily busy design, it didn’t feel at all oppressive. Shades of green, tiger print; modern free-standing wash basins with kaleidoscopic elements and panoramic wallpaper. It was all as nostalgic as it was modern. 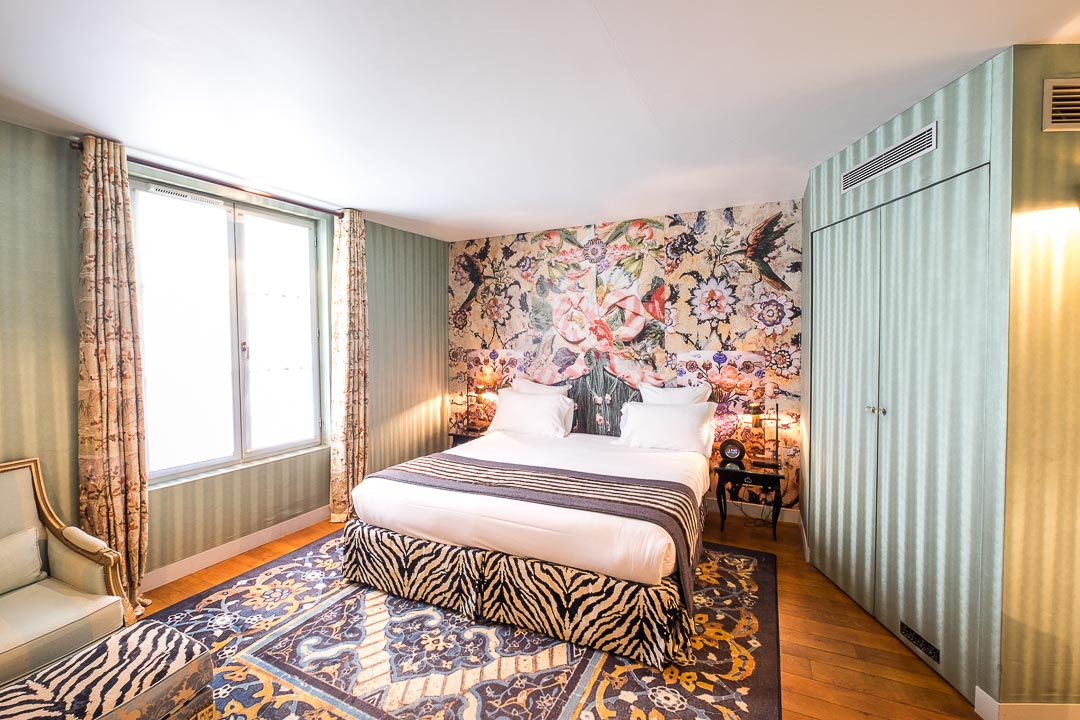 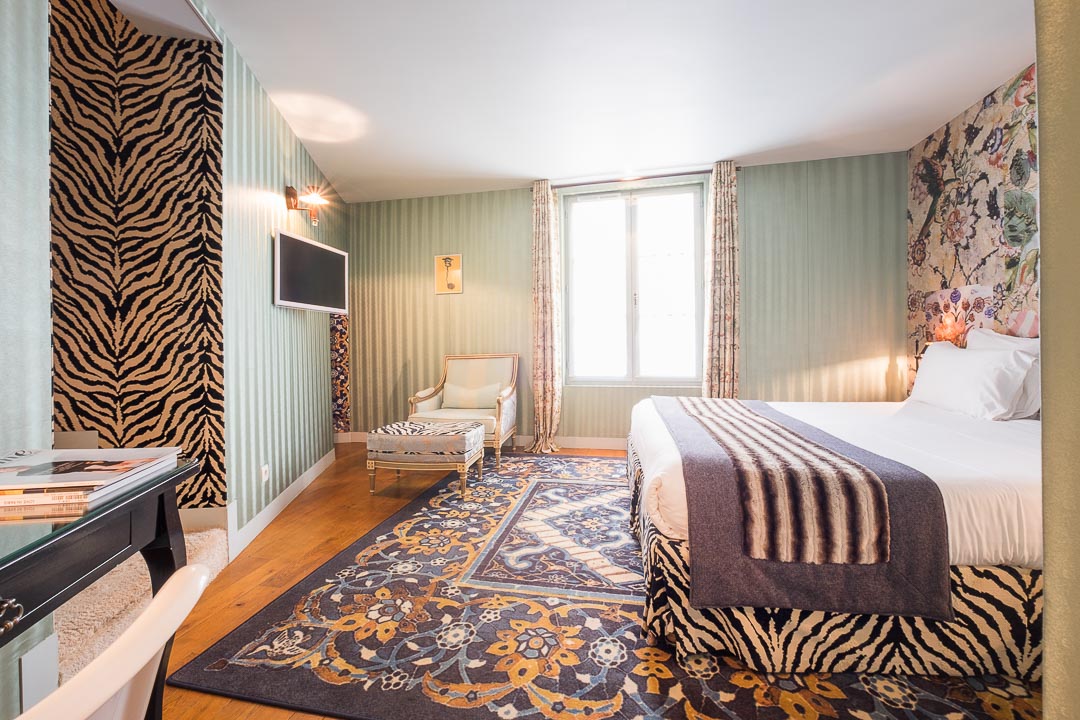 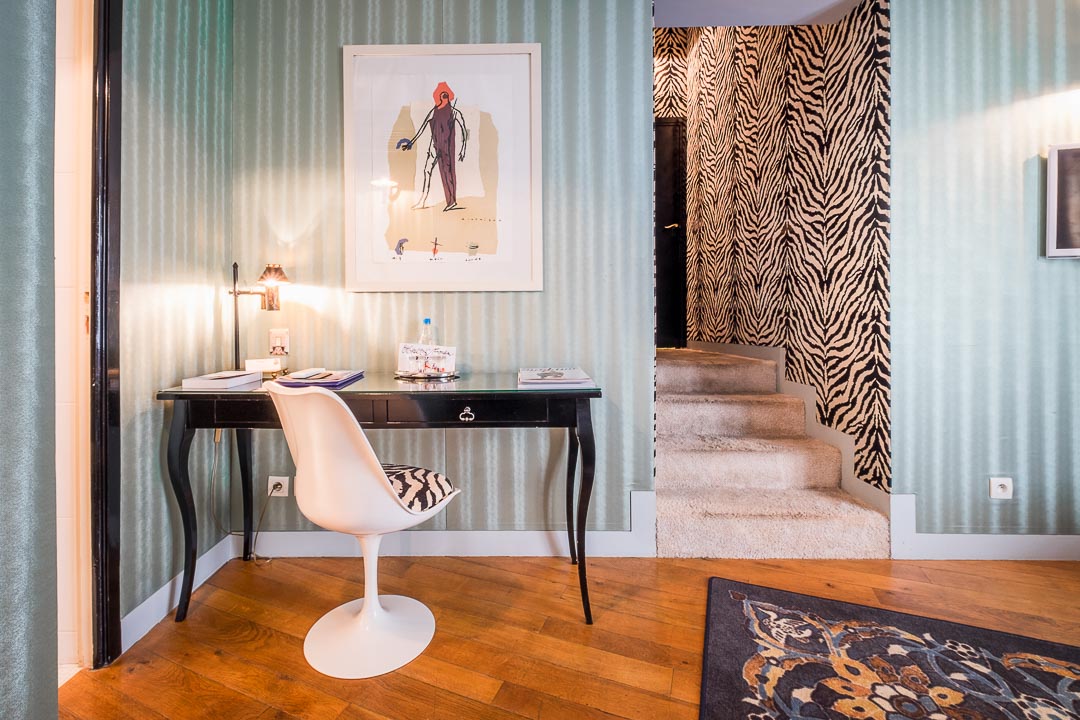 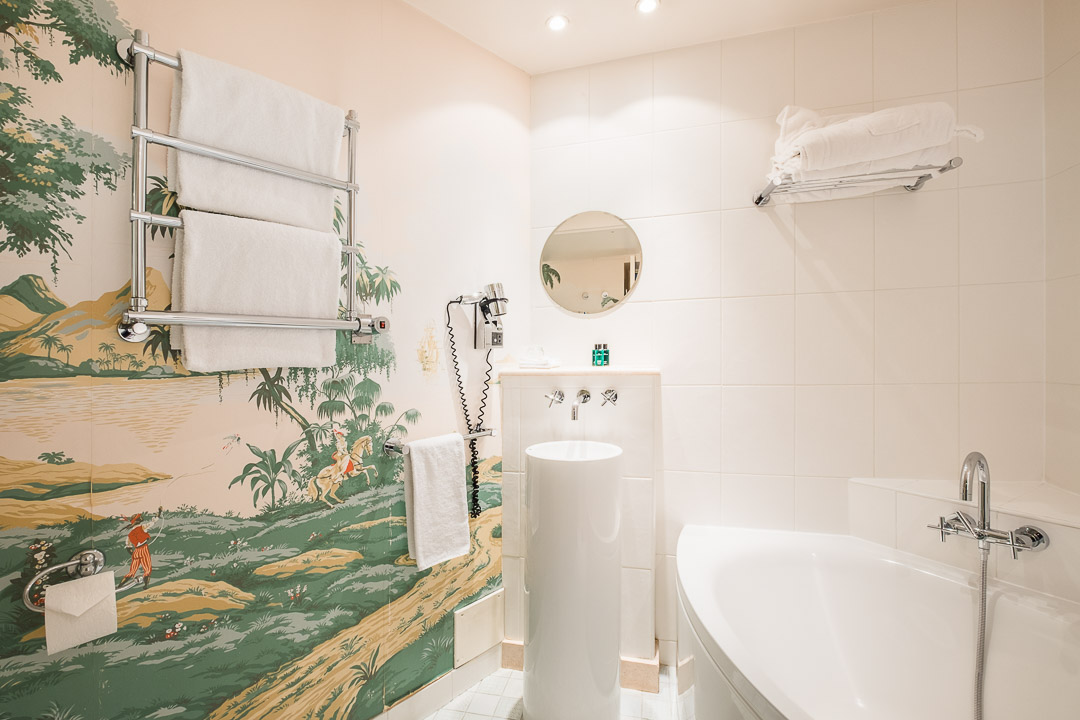 The facilities include free fast Wi-Fi, air-conditioning, a flat screen TV, minibar and an assortment of bath and skin-care products by Hermès.

Guests can use the Hotel’s private parking, and have access to the wellness facilities in the nearby sister hotel, Pavilion de la Reine. There are also free bicycles available to explore the city.

You’re guaranteed a great stay at the Hotel du Petit Moulin, with its prime location and unique interior. Definitely one to remember!

We combined our stay in the Hotel du petit Moulin with a tour of Paris that brought us to a number of good places for foodies. You can read all about that here: We wrote a special report of our meal at Les Chouettes. 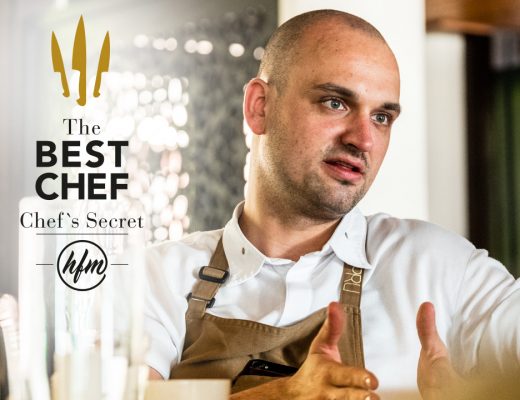 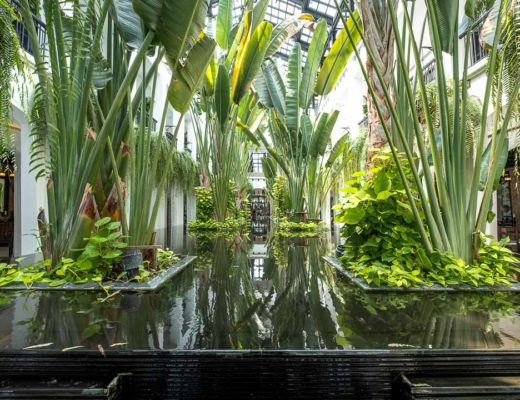 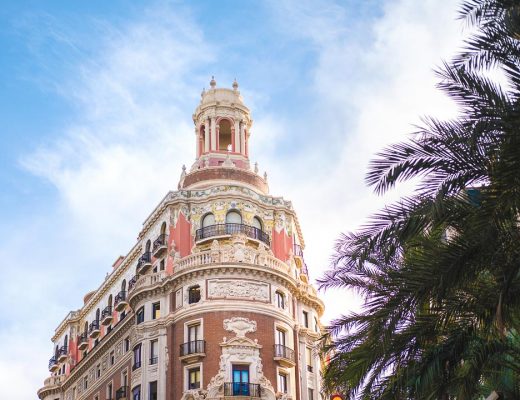